This is the story of our daughter Clara, and her encounter with Kawasaki Disease.  Clara was born on September 21, 2005, the fourth child in our family.  At six months old, following a few weeks of traveling, Clara became ill.  I went to pick her up from her nap one Sunday afternoon in mid-March, and she was burning up.  Her temperature was 103 degrees.  She also had a rash on her body.  We gave her a tepid bath and calmed her.  The next day she was still fevering and very lethargic.  A visit to the pediatrician revealed a double ear infection, so she started antibiotics.  Three days later, a second visit to the doctor, and still no better.  By now, Clara had begun vomiting and was extremely lethargic.  The rash had disappeared the day it showed up, but the fever remained. 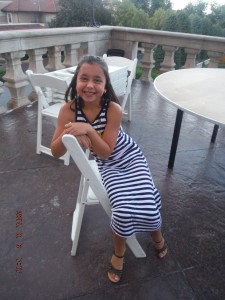 We finally had to admit her to the hospital ER for fluids.  All testing was coming back negative, and everyone was wondering what was wrong with our little girl.  Was it Hib- she hadn’t been vaccinated against it.  Was it Kawasaki Disease?  What we knew about that was that it normally occurred in Asian boys, 3-5 years old.  It is characterized by a strawberry tongue, red conjunctiva and peeling of the palms of the hands.  She had none of these.  For days we looked for the signs.  There is no test to diagnose it.  It is through a series of eliminating other illnesses that Kawasaki Disease is diagnosed.  Clara became a pincushion as doctors, nurses, the best the hospital had, tried to get an IV line inserted.

The doctors had now diagnosed her condition as “Fever of Unknown Origin”.  Finally 14 days after her initial fever,  an echocardiogram was ordered to examine her coronary arteries.  Yes, they were dilated – Clara had Incomplete/Atypical Kawasaki Syndrome.  The treatment for this was IVIG (an immunoglobulin).  Clara received the treatment on day 14 of her illness, and her fever gradually came down.  It was over…or so we thought. 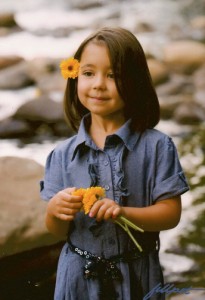 A follow-up to the pediatric cardiologist told us it was FAR from over. Ideally, to prevent damage to the circulatory system, the IVIG should be administered by day 10.  It was diagnosed so late because she didn’t fit the age, sex, gender or ethnic demographic, and she didn’t have the classic signs of Kawasaki Disease.  Clara’s arteries that supply her heart muscle to keep it functioning were large- measuring over 6mm (normal is 2mm).  Her doctor was stunned that she was not on blood thinners, and had not had any heart damage over the few weeks between her hospital stay and doctor’s visit.  She was immediately put on several medications.  Visits every two weeks for the next six weeks showed that the aneurysms were continuing to grow to giant proportions!   The ultrasound techs had not seen anything like it but tried not to alarm us.

We had so many questions:  How much bigger could they get before bursting?! Was our baby girl going to live?  It is an unthinkable question for any parent.  The statistics are disturbing for damage to this extent. The aneurysms maxed out at nearly 9mm by the end of May.

By God’s grace, the aneurysm growth stabilized and very slowly began to shrink.  Clara is now a very vibrant little lady.  Her coronary aneurysms have shrunk to a moderate level, and she no longer takes Coumadin or has to have her finger poked to monitor it.  She is so alive and spunky.  Her doctor’s immediate concern is whether she can keep up with the other kids her age.  The question is- can they keep up with her?!

Click here for more information about the Kawasaki Kids Foundation.